I was recently involved in creating an animation for a project called To This Day. This was an anti bullying initiative from the Canadian Poet Shane Koyczan (who I saw at the Edinburgh Fringe last year- He was fantastic).
The brief was to anime a short section of one of his poems (To This Day) and then clips from various animators will be edited together. This was my first piece of animation for a while and my first piece of Machinima animation since 2008.
Below is the final video. My clip unfortunately got edited out, however my name is still in the credits and my animation can be viewed at this link.

A second set of images from way back in 2008. The explanation for the project can be found here.
The initiative that funded the project was called Pocket Shorts, but I now believe that this had been disbanded which is a shame. It was a good funding initiative to give film makers, game designers and creatives a chance to fund small projects for mobile phones.
The work has been archived at a site called Pocket Place, but it looks like this is not getting updated either. 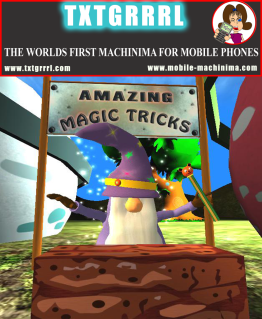 These images are from a Machinima series I created for mobile phones way back in 2008. Machinima is an animation method that utilises 3D Game Technology to tell stories. I have not showcased this work on the blog, so I thought I’d post it up here.

The title of the series is Txtgrrrl and the Machinima told the story of a girl who is so transfixed with her phone, she does not notice the bright and colourful world around her.
For the series I received a commission from Scottish Screen, The Scottish Arts council and other sponsors to create 2, 30 second episodes.

The episodes were made in 2008 and were specifically designed for mobile phones. Two websites were created to promote TxtGrrrl and are now archived at http://www.steven-portfolio.co.uk/. 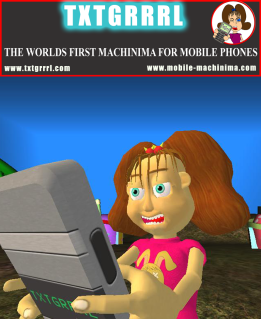